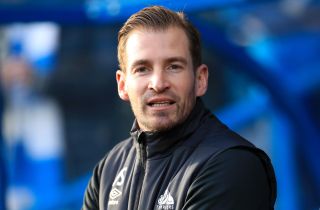 The relegated Terriers have won just three matches in the league this season but did get the better of United at the John Smith’s Stadium last season under previous boss David Wagner.

Siewert wants to put on a similar performance this time around, adding his side were looking to move on from their eight-game losing streak.

“The last home game should be very special,” the Huddersfield boss said.

“A win would give us a good feeling and give the supporters something. We want to break the habit of losing.

“We have to focus on our game and our possibilities and how we can hurt them.”

Although Manchester United have won only won one of their last five league matches, Siewert said they would not be taken lightly.

Ole Gunnar Solskjaer confirmed the Spaniard would start against Huddersfield and Siewert brushed off his form, saying: “I think he’s a great goalkeeper.”

On last season’s 2-1 win home win against United, Siewert said: “We have spoken about the fact that we beat Man United at home last season.

“They are a massive club, but it gives us hope we can do it again.”

Siewert has lost 10 out of his 11 matches in charge of Huddersfield and if they lose on Sunday they will set a new Premier League record for most home defeats, overtaking Sunderland who lost 14 in 2002-03 and 2005-06.

The German is desperate to break their losing run and is also keen to avoid setting a new record for fewest home goals scored in a season – they are one short of the 10 Manchester City managed in 2006-07.

“We want to break that now, to win games you need a winning feeling which must be installed,” Siewert added.

“If you’re losing you should break these habits so we’re working on that every day.

“It was a really tough season. It’s hard, this is the mental mindset we are trying to change.

“The club doesn’t deserve a record. I don’t focus on that too much, we are thinking positively. We go out at home to score.”

Siewert confirmed centre-back Mathias Jorgensen would not be available to face United, while goalkeeper Ben Hamer has returned to training but will not feature.