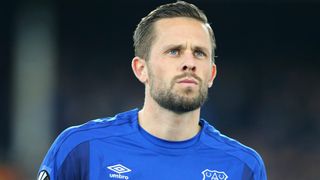 Gylfi Sigurdsson admits his Everton performances are falling short of what he hoped for after signing in a big-money move from Swansea City.

Despite joining for a reported £45million in August, the Iceland international is yet to register either a goal or assist from seven Premier League appearances.

That comes as Everton, who were tipped to challenge for a top-four finish at the start of the season, sit 16th with eight points from as many games after Wayne Rooney's late penalty salvaged a 1-1 draw against Brighton and Hove Albion on Sunday.

Sigurdsson told reporters: "It is not going as I hoped. No, of course not.

"For the team as well. Personally and collectively we are just off our best. That is reflecting in individual performances.

"But it's small margins. I don't think we're a mile off getting results. A couple of scruffy wins would bring some confidence to the team and that's sometimes all you need.

"We just have to work our way through this. We are not scoring enough goals and we are conceding too many, I don't think we are too far away but things just aren't clicking.

"We're all more than determined to turn it around. We have some big players and hopefully we can start getting better results."

We fought hard and played well for parts of the match. We were maybe unlucky at the end not to get more. Good attitude from the players October 15, 2017

Everton are also struggling on the continent, with Thursday's home Europa League match against Lyon crucial after Ronald Koeman's side only collected a point from their first two Group E games.

"Obviously the next game is an important one but, for us at the moment, we just need to win, pretty or ugly," Sigurdsson added to the club's website.

"We just need to win. Once we do that the confidence will come back into the team and things will become a bit easier for us.

"It's a strange group. I think everyone can beat anyone. There's a few good teams in there.

"You may need at least 10 points to go through and it will be nice to start [building towards] that on Thursday against a tough team."