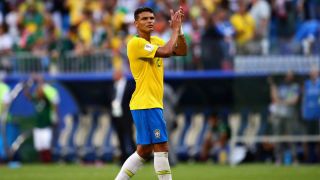 Thiago Silva is preparing to face a "very strong" Belgium in the quarter-finals and knows Brazil cannot become complacent amid their status as World Cup favourites.

Silva helped the Selecao secure a third successive 2-0 win on Monday as goals from Neymar and Roberto Firmino saw them advance from their last-16 meeting with Mexico in Samara.

Up next for the five-time champions is a trip to Kazan on Friday to face Belgium, who staged a scintillating comeback from two down to defeat Japan 3-2 in their second-round tie.

Tite's men are being widely tipped to lift a sixth crown in Russia, especially with the likes of Germany, Argentina, Portugal and Spain already out, but Silva knows glory is far from guaranteed with Roberto Martinez's talented side lying in wait.

"They are very strong physically and technically. Belgium deserve to play in the last 16," Silva said. "It's great because it's a big game to play.

"I think that in all competitions, Brazil is the favourite. But we know that's not enough.

"We have to work hard and give our best every game if we want to win the title. We'll continue to work and rest well because Friday's game will be even more difficult."

Neymar was at the centre of attention on Monday, scoring the first and assisting the second either side of a dramatic reaction to an off-the-ball altercation with Miguel Layun.

"This is normal because he has many qualities. The players who defend him make fouls," Silva said of his team-mate.

"Because it's always hard to defend Neymar and take the ball without making fouls. But it was a tough game.

"Mexico deserved to be in the last 16 and did a great game. But only one team continues, and we deserve it after our performance."