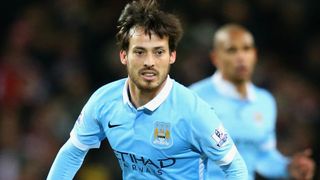 Manchester City midfielder David Silva is desperate to claim the one trophy that has eluded him so far - the Champions League.

Silva, who turned 30 last week, has claimed a World Cup, two European Championships and as many Premier League titles among others in his professional playing career.

However, Silva has never played past the quarter-final stage of a Champions League tournament and the Spain international said he is as hungry as ever to keep improving and winning trophies.

"I think I've said on a few occasions that the thing that's still missing, that I haven't got my hands on is the Champions League. That's something I'd still love to be able to do," Silva said.

"I still consider it a work in progress, with constantly striving to get better and hopefully achieving more with the team.

"The league is always the trophy you probably most want to win because that's the tournament you're playing in week in, week out.

"But we need to step up a level in the Champions League so it will be important to go as far as we possibly can in that tournament as well."

City are favourites to advance to the quarter-finals of this year's Champions League after drawing Dynamo Kyiv in the last 16.