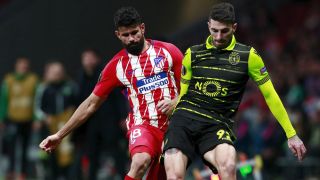 Atletico Madrid head coach Diego Simeone believes Diego Costa produced his best performance since returning to the club in their 2-0 first-leg win over Sporting CP in the Europa League quarter-final.

It was an accomplished display at Wanda Metropolitano, where Atletico saw off the sloppy Portuguese visitors thanks to Koke and Antoine Griezmann on Thursday.

Koke scored Atletico's quickest ever Europa League goal after 22 seconds having been teed up by Costa, while Griezmann was gifted the team's second late in the first half courtesy of Jeremy Mathieu.

However, Simeone singled out striker Costa, who returned to Atletico from Chelsea in January.

"This was his best game since he came back with us, he's a beast, he was running all the time, putting pressure on the opponent, breaking his mark," Simeone told reporters.

"He participated in both of the goals, played great with the team, a very good game, his best game since he came back."

Simeone added: "Well the thing is that you can never take something for granted in these tournaments. We're used to seeing games in these kind of tournaments that should be calm but they're not because the teams are motivated and we saw that anything can happen in football. It's true that 2-0 is an important score but we need to play the second leg the same way we played here today.

"I think that goal a few seconds after kick-off was the result of our will to go for the win from the first second.

"We prepared in advance to put them under strong pressure and push them in their own half of the field. Because of our great pressure we scored two goals, we always tried to bother them when they had the ball, that made it easier for us. We did a great collective job, I think one of the best jobs this season."

Despite taking a two-goal lead to Lisbon, Griezmann insisted: "I'm happy with the result, but we have to be on our toes because they're a tough team and we're going to have a difficult time in Lisbon."