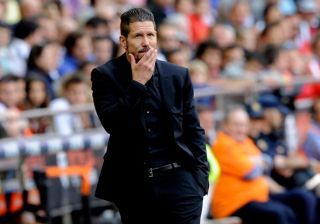 Atletico, who have not won La Liga since 1996, moved closer to breaking their drought thanks to Raul Garcia's header just before half-time on Sunday.

Diego Costa was twice denied in the second half by Valencia goalkeeper Vicente Guaita, while the hosts came closest to levelling proceedings when Jonas saw a goalbound header blocked.

But Atletico held on - despite having Juanfran sent off for a crude lunge on Pablo Piatti - to secure a first league win at the Mestalla since March 2003, leaving Simeone elated.

He said: "We played today against a really important team, which played a serious game.

"They had the attitude to win the game every moment.

"We felt good in the last moments of the first half and we had more chances during the second to be calmer with the score but we didn't and we had to manage the 1-0.

"It was an important game and we got it."

Table-toppers Atletico have fixtures against Levante, Malaga and Barcelona to come in the league, and visit Chelsea on Wednesday for the second leg of their UEFA Champions League semi-final.