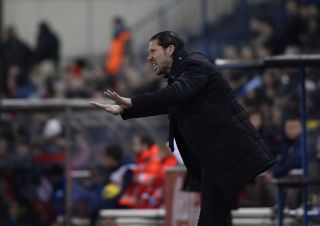 The former Argentina international made his initial comments in August., stating that the pair "play in a different league" and fans of other clubs could "only aspire to be third or fourth".

However, Simeone's Atleti have gone some way to dispelling that this term, entering the mid-season Spanish break level on points with Barca at the Liga summit, five clear of Real.

With Spanish Football Federation president Angel Maria Villar reported to be considering amendments to the league's structure, Simeone remains adamant that the problem is a financial one.

"Changing the calendar does not solve the problem, which is the economic conditions of each team," he said.

"Maybe it was an incorrect assessment to say that La Liga is boring, but it is true that there are not the same possibilities."

Simeone, who completed the loan signing of Jose Sosa from Metalist Kharkiv this week, also claimed fans of the club feel more connected than others in the league do to their sides.

"Today, when a fan sees Atletico, they see reflected in this team their sense of being in the situation that we are in," he added.

"Given the differences in numbers in the league, many people may feel reflected in us for the effort (and) commitment. Other fans of other teams would like to be in our position."