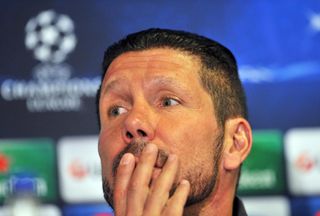 If Simeone can guide Atletico past Jose Mourinho's men at Stamford Bridge - the tie is goalless heading into the second leg - the Spanish club will remain on course for a domestic and European double, although the Argentinean is not concerned with their overall progress so far.

Instead, he wants to ensure La Liga leaders Atletico are successful in their first Champions League semi-final since 1974 and build on what has already been an impressive season.

"You all know me very well. I don't like to stop and think about what's happening, but keep working," he said.

"The press can evaluate the progress the team has made.

"I think it's a game of football, there's a ball and the team that works best will win the match. I believe more in hard work and desire."

Atletico, the only unbeaten side left in the competition, have been something of a surprise package this season as they have mounted a La Liga title charge while remaining in with a chance of winning their first Champions League trophy.

Simeone played down suggestions that Atletico are similar to the unfancied Porto side that won the competition under Mourinho in 2004.

"It's difficult to compare teams," he explained.

"That was a great team with a lot of desire and passion, but the reality is that we have a very important game against a team that's difficult and that plays well when it finds spaces.

"We're thinking most of all about what we're going to face."