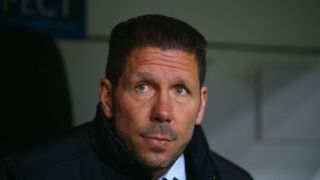 Atletico struggled to create many chances at the BayArena, and when they did Bernd Leno was equal to anything they put on target – the goalkeeper making a string of important interceptions on Wednesday.

Chances were at a premium at both ends until Karim Bellarabi combined with Hakan Calhanoglu, the latter sealing Leverkusen's 1-0 win.

Simeone's side are far from out of the competition, though, but will need to score at least two goals at the Vicente Calderon to progress.

"It was a strange game, neither side created too many chances," said Atletico's head coach. "In the second half things were even and we tried to use our weapons.

"I'm going away reasonably content, because I had to use two substitutes in the first half.

"They play as they do and they do it well; it's very similar to our style.

"We each had a clear chance and they took theirs and we didn't. It could have been a worse result."

The two sides meet again in the Spanish capital on March 17 for a place in the quarter finals.