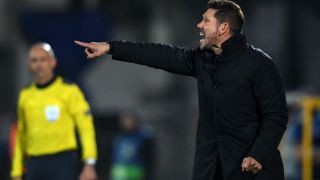 Diego Simeone saluted Yannick Ferreira Carrasco after his match-winning goal in Atletico Madrid's 1-0 victory over Rostov but reminded the Belgian that he still has a lot of improving to do.

Atletico dominated throughout in Russia and should have gone ahead on numerous occasions in the first half, with Angel Correa in particular at fault with two big misses.

Carrasco eventually gave Atletico a deserved lead in the 62nd minute with a powerful finish following a Juanfran cross, adding to the hat-trick he scored in Sunday's 7-1 obliteration of Granada.

But Simeone calmed any growing hysteria surrounding the 23-year-old.

"Carrasco is doing well," he told reporters. "I'm very happy for him and he needs to continue as he is.

"There's a lot of improving he can do."

Simeone was not entirely satisfied with the overall team performance either, ruing Atletico's inability to finish Rostov off.

"It was a tough game," he added. "We know what they were about.

"We had chances to seal the win but we were not at the races in that sense and that made us anxious.

"Rostov defended with eight men and they closed the space down well around their penalty area.

"It's not easy to penetrate and create many chances with such a closed defence. We need to remain grounded now more than ever."

The result leaves Atletico just needing to win against Rostov at the Vicente Calderon in their next Champions League outing to secure passage to the knock-out stages.