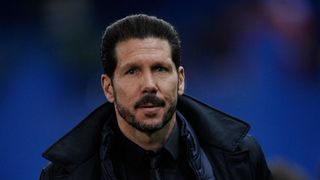 Diego Simeone does not expect any psychological scars when his Atletico Madrid side return to the Estadio da Luz for the first time since losing the 2014 Champions League final to rivals Real Madrid.

Atleti appeared set for a famous 1-0 win at the home of Benfica in the showpiece before Sergio Ramos' injury-time header set-up a 4-1 extra-time victory that helped Real to a 10th triumph in Europe's premier competition.

Simeone takes Atleti back to the stadium for Tuesday's final Group C encounter as they seek a win to secure top spot.

And the head coach, whose side were beaten 2-1 in the reverse fixture, is expecting a tough encounter.

"Benfica played a great game in Madrid. It's a team with interesting references up front. They are in the place that we want and we'll try to win the game," he said.

"We have to be aware of the players that can create us problems. [Nicolas] Gaitan is one, Renato [Sanches] is another of Benfica's very interesting youngsters - but all the team has quality.

"Our aim is always to win and of course it would be good to end in first but it guarantees us nothing. We are back in a stadium where we have experienced important things - good, by playing a Champions League final and bad by losing it. But that's life and we have to keep on going."

Atleti are set to come up against a familiar face in the shape of Raul Jimenez, who swapped the Vicente Calderon for the Portuguese champions in August after just one season and one La Liga goal.

"We did nothing wrong with Raul Jimenez, on the contrary," Simeone added. "We were very happy with him but you must appreciate he had to compete with [Antoine] Griezmann, [Fernando] Torres and [Mario] Mandzukic and that is very competitive.

"It's no wonder he makes goals and what is happening makes us very happy because he is a player who left us good memories."