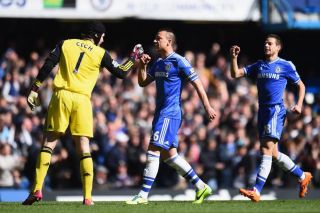 Cech had enjoyed a decade of unrivalled success in Chelsea's goal after arriving from Rennes in 2004.

However, manager Jose Mourinho has opted to put 22-year-old Courtois in for Chelsea's first two league games of the season, explaining the decision was for the good of the club's future.

Cech has instantly been linked with a move away from Stamford Bridge, and Terry concedes the Czech Republic international has an important decision to make with just a week of the transfer window remaining.

Terry said: "It is very hard to take for big Petr but he is Chelsea through and through and has been unbelievable in the way he has responded in training and in his attitude.

"Some players throw their toys out of the pram and Petr 100 per cent has not done that. He is fighting for his place.

"How long can he fight for his place? I don't know that.

"That is a decision for him and the club to decide but we have got two of the best keepers in the world.

"Petr has done it for many years and if Thibaut can replicate that, it will take some doing."