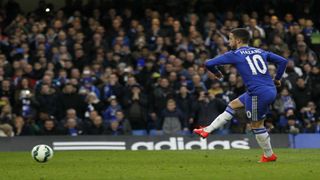 Hazard has been outstanding for the London club this season and Stoke were the latest side to be tormented by the Belgium international, who scored his 17th goal of the campaign from the penalty spot and laid on the winner for Loic Remy.

Charlie Adam's sensational strike from almost 65 yards out cancelled out Hazard's opener, but the latter unselfishly set up Remy for the game's decisive goal in the 62nd minute.

Chelsea are now seven points clear at the top of the table and Terry hailed the contribution Hazard has made in their bid to regain the title.

He told Sky Sports: "Eden Hazard has been our best player by a long way this year. He the one who will come up with a moment of magic when you need it.

"He is up there for me with Lionel Messi and Cristiano Ronaldo. Plus he can only get better and better."

Terry is not getting ahead of himself in the race for the title, with Chelsea still having eight games to play.

He added: "If we keep doing that [winning] it's going to be difficult for other teams.

"It's the old cliche, tick a box and get three points. We now have a massive game at QPR next week in a London derby."