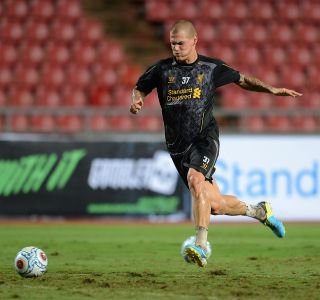 Skrtel was due to play for Slovakia in a friendly against Romania on Wednesday, but instead stayed in England to undergo treatment on the problem, which he described as minor.

"I stretched ligaments in my knee. Luckily it is not a serious injury," Skrtel wrote on his website.

"I can basically run but it hurts when I kick the ball. I can feel the pain in the back of my knee. It is not one of the major muscles but it is still not very comfortable.

"I spoke with Mr (Jan) Kozak, who is a new coach of Slovakia, and I also spoke with the medical staff and we agreed that it would be better when I stay in Liverpool. I hope it is not a serious injury, though, and I want to be back on the pitch as soon as possible."

There was better news for Liverpool on Tuesday, however, with striker Daniel Sturridge scoring two penalties against Newcastle in a friendly.

The match was played behind closed doors, and was organised to let Sturridge prove his fitness after an ankle injury.