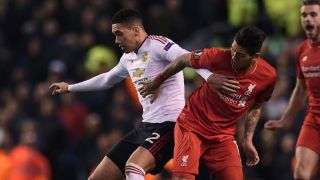 Chris Smalling admits Manchester United face a big ask to progress to the Europa League quarter-finals after losing 2-0 in the first leg of their last-16 clash with arch-rivals Liverpool.

United endured a torrid night at Anfield and were lucky to escape with just a two-goal deficit, but Smalling was particularly unhappy not to take at least an away goal into the home leg at Old Trafford next week.

"We’re disappointed," he told MUTV. "I think we could have done with getting an away goal – we know we’ve got a difficult job on our hands.

"They had a lot of runners coming from midfield, and I think our wingers were having to defend a lot, so whenever we won the ball back we couldn’t really sustain it [possession] and keep it. In that first half, it was very difficult, we couldn’t get up the pitch.

"In the second half we were a little bit more comfortable, albeit without creating too many chances. We could have really done with getting that away goal. I think if you get that goal, you can be a bit more positive, but it’s now up to us to rectify it in front of our own fans. The first goal is going to be crucial.

"We’re all disappointed, but knowing we’ve now got two home games, it's up to us to take the game to West Ham [on Sunday in the FA Cup] and then Liverpool [next Thursday]."

Smalling was full of praise for goalkeeper David de Gea, who kept the scoreline respectable for United after making a number of saves, including one brilliant one-on-one effort against Sturridge which spared his own blushes after he slipped to allow the chance.

"I think both of their goals were pretty fortuitous, but David did make two very good saves," he added.

"I think night games have a different edge to them and I think our fans will be right behind us. It’s down to us to deliver and put on a better performance than we did tonight. We’re obviously disappointed tonight, but we need to recover."