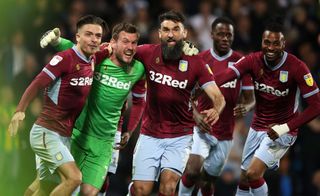 Goalkeeper Steer saved Albion’s first two spot-kicks from Mason Holgate and Ahmed Hegazi as Villa won 4-3 on penalties after losing 1-0 on the night and drawing 2-2 on aggregate.

Tammy Abraham scored the winning penalty – after Albert Adomah missed his chance to win it – to send Villa to their second successive play-off final after last year’s defeat to Fulham.

Steer spent the first half of the season on loan at League One Charlton before being recalled after Orjan Nyland’s season-ending Achilles injury in December.

Smith said: “It’s amazing what can happen and how opportunities arise. Orjan was doing well but snapped his Achilles and the phone call went in to get Jed back and he’s been brilliant for us.

“They were two great penalty saves and we had prepared for penalties since the day we qualified for the play-offs. A lot of preparation went into it, you have to put in the work and it went for us.

“The top six in this league is really tough this season, they made it very difficult for us in both games but we deserved it.

“It’s a challenge, we keep throwing challenges at these boys and they keep on accepting them and doing well.”

Villa were second best until Brunt’s dismissal and then failed to break the brave Baggies down in open play.

Dawson nodded in off the post after 29 minutes but Albion could not add to their lead despite chances for Jacob Murphy, Matt Phillips and Brunt.

Northern Ireland international Brunt, who was already on a yellow card, was dismissed for a reckless tackle on John McGinn and the Baggies’ hopes disappeared.

Caretaker boss Jimmy Shan, who replaced the sacked Darren Moore in March, must now have his future resolved after Albion missed the chance for an instant return to the Premier League.

He said: “We’ve had some informal discussions and there’s assurances they’ll be a coaching role in some capacity. I imagine they’ll heat up in the next couple of days.

“I’ll speak to the powers that be, I’ve got no plans to go away until early June.”

But Shan insisted he had no issues with Brunt’s dismissal.

He added: “Chris hasn’t got any qualms with it, neither have I. It changed things. We were very good, I thought we could have wrapped the tie up and we looked likely winners.”

84' – Could this be the moment that swings the tie back in Villa's favour?#EFL | #EFLPlayOffs | #StepUppic.twitter.com/i4CvhpCmGg— Sky Bet Championship (@SkyBetChamp) May 14, 2019

Shan also refused to blame Holgate and Hegazi for their misses.

“They’re naturally distraught, when you’re in that position it’s very difficult to console them,” he said.

“We’d lost Stefan Johansen, Chris Brunt, Matty Phillips and Jay Rodriguez who would have all been penalty takers. Credit to both of them for stepping up.”