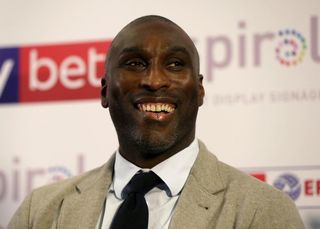 Sol Campbell is optimistic he can produce another great escape from relegation after being unveiled as Southend manager on Thursday.

The former England centre-back was appointed on Tuesday evening on a contract until the end of the 2021-22 season.

He will be assisted by Hermann Hreidarsson, while ex-Manchester United striker Andrew Cole has been named as his forward and attack coach.

Campbell kept Macclesfield up against the odds in his first managerial role, having taken over last November with Town seven points from safety, but he faces arguably an even tougher task at the Shrimpers.

Southend are already eight points from safety, with only crisis club Bolton keeping them off the foot of the table, and have won just one league game all season.

Campbell will have plenty of work to do after watching his new side crash to a 7-1 thumping home loss to Doncaster on Tuesday, which saw two Southend players dismissed after taking an early lead.

However, the 45-year-old remains confident that the Shrimpers can retain their League One status, with 32 matches still left in the campaign.

“My job is to make sure the guys realise there is enough games to get ourselves out of this situation,” he said at a press conference reported by the club’s Twitter account.

“We need to give teams more problems and go for it.

“We’ve got to overachieve now. We’ve got a deficit and we need to close that. Instead of being on the back foot we need to be on the front foot in games.

“We’ve got enough games to get out of this situation but it has to start now because time is precious. My remit is to get these guys working together.

“We’ve got some good players here but we need to start working together and be competitive. We’ve not really been doing that.

“Hopefully the team can respond to that and start on a good footing and that’s down to me.”