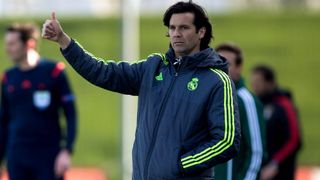 Solari was named caretaker Madrid boss after Julen Lopetegui was sacked in the wake of his side's 5-1 El Clasico loss to Barcelona on Sunday.

The former Argentina and Madrid midfielder steps up from his role as Castilla coach – just as Zidane did in 2016 – but Solari played down comparisons.

"Let's just let him live in peace, he's one of Real Madrid's greatest icons," he told a news conference on Tuesday.

"There's not enough words to describe Zizou, let's leave him live with his greatness and not compare [us].

"Nobody can compare with him."

Zidane was at the helm of Madrid for two and a half years, leading the club to three straight Champions League titles and a LaLiga crown before resigning in May.

Solari will take charge of Madrid for the first time in a Copa del Rey clash against Melilla on Wednesday.