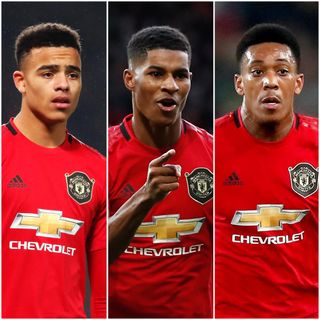 Ole Gunnar Solskjaer insists Manchester United’s current attacking trio have the potential to emulate one of the great combinations from his own playing era at Old Trafford.

While Mohamed Salah, Sadio Mane and Roberto Firmino have hit the net 38 times in total in this campaign, their United counterparts have summoned one goal more, despite sitting 27 points adrift in the Premier League table.

Solskjaer said: “The front three that they (Liverpool) have got have been playing together for seasons, and you can see the rotation, the movement and the understanding between them.

“We’ve got a way to go before we get to the level of understanding and consistency that Liverpool have.

“I was here when (Cristiano) Ronaldo, (Carlos) Tevez and (Wayne) Rooney were here, and that’s what we want as Manchester United supporters.

“You want to see them express themselves and go to places like Anfield and put the fear into their defenders.”

Solskjaer is unlikely to be able to field his trio together for the trip to the runaway league leaders, as Rashford fights to recover from the back injury he aggravated against Wolves.

The likes of Paul Pogba, Marcos Rojo and Scott McTominay are still out, while Luke Shaw’s continued injury worries are likely to give another United new boy the chance to impress.

The boss has given an update on the fitness of @MarcusRashford ahead of our visit to Anfield 👇#MUFC#LIVMUN— Manchester United (@ManUtd) January 17, 2020

Brandon Williams has started 12 times at left-back for United this season and Solskjaer has wasted no time in comparing the 19-year-old to another former club great.

Solskjaer added: “I think Brandon has been absolutely outstanding since he came in. Every challenge he has tackled head on.

“He’s only 19 and he’s made 12 starts and he reminds me so much of the mentality of Gary Neville. I think he will enjoy going to Anfield, put it that way.”