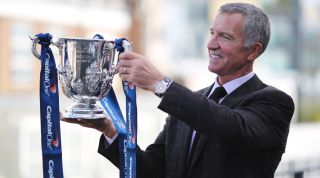 Souness's former club are one of nine Premier League teams left in the League Cup ahead of this week's last 16 fixtures, after eventually seeing off Middlesbrough in a mammoth 30-kick penalty shootout in the third round.

Brendan Rodgers' team host Swansea at Anfield for a place in the quarter-finals, but Souness has warned against resting too many big stars for the negative psychological effects it can have on the squad.

"If a manager is continually talking about resting players, he's planting a seed that they're tired," he exclusively tells FourFourTwo. "I personally never ever felt tired.

"I know strikers have different demands on their body, but I think the only time I ever felt tired would have been psychologically when we had lost a couple of games. When you're winning games, you're looking forward because you want to be playing every other day, not every other fortnight."

Souness won the competition four times in a row for Liverpool from 1981 to 1984, but the 61-year-old says the players needed no special motivation from Bob Paisley and Joe Fagan to lift the trophies.

"They did emphasise it, but so did we," declares the Scot. "You're in a cup final around March time and that's something to look forward to.

Liverpool are aiming to take a step closer to winning the trophy they last lifted in 2012, beating Cardiff on penalties, and Souness says Rodgers' men have as good a chance as anyone of managing it this time.

"They can't ask for any more than a home tie," he says. "They're playing a team with no surprises; Swansea will try to take them on with their own brand of football. Brendan Rodgers will know that inside out.

"If they win they could get a Fulham or a Derby, MK Dons or Sheffield United in the next round, and then after that a two-legged semi-final, one of them at home. So they'll see this as a wonderful opportunity."

Graeme Souness was speaking on behalf of Capital One, the credit card company and sponsors of the League Cup.