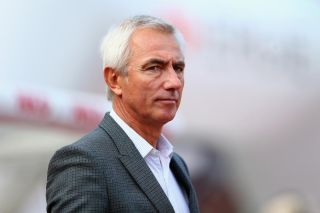 Shin Tae-Yong, Park Geon-Ha, and Kim Bong-Soo will lead South Korea in their friendlies against Venezuela and Uruguay next month with the Korean Football Association (KFA) revealing they will broaden their search for a new permanent boss to replace Hong Myung-bo.

Hong was South Korea's coach at Brazil 2014 but after overseeing the country's worst performance at a World Cup this century, he resigned in July.

South Korea finished win one draw and two defeats from their three games in Brazil, and a goal difference of minus three.

Van Marwijk had been the KFA's preferred candidate, as they focus on employing a foreign coach, but "tax-related salary issues" and discussions regarding where the coach should be based, saw the negotiations fail.

"We could not do a deal with Van Marwijk," Lee Yong-soo, the head of the KFA's technical committee, said on Monday.

"We wanted him to accept our offer but we were also preparing meetings with other candidates.

"There was not enough time so we asked him to answer by last Friday, his answer was no."

Van Marwijk wanted to be based in his native Netherlands in between matches but Lee claimed that was unacceptable.

"The most important condition is that the new coach should be able to work with the [South] Korean national team with passion and dedication," he said.

Lee added that the KFA's technical committee will now open negotiations with a number of candidates as they aim to fill the position before the 2015 AFC Asian Cup in Australia in January.

"We focused on negotiations with him only but from now on we will contact and negotiate with several coaches at the same time," he said.

South Korea face Venezuela on September 5 and Uruguay four days later, while they have a total of six friendlies planned before their opening match of the Asian Cup on January 10 against Oman.