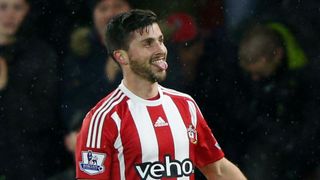 Goals from Shane Long and Dusan Tadic gave Southampton a comfortable 2-0 win over Watford on Wednesday in the Premier League to ease the pressure on manager Ronald Koeman.

Former Reading star Long played a key role throughout and it was his flick at the near post that put the hosts ahead after 17 minutes at St Mary's Stadium.

Substitute Tadic killed the game off when he tapped the ball home in the 73rd minute to help ensure the Saints secured just their second victory in 11 matches in all competitions, with Watford losing for only the third time in the league on the road this season.

Koeman's men dominated the opening exchanges with Matt Targett and Long impressing down the left-hand side.

And Long's bright start was rewarded when he was played in by Targett and the cross was inch perfect for the Republic of Ireland forward, who steered his header into the bottom corner past Heurelho Gomes.

The Brazilian was then called into action to stop Sadio Mane, who was allowed time and space on the edge of the area, and his acrobatic save forced a corner. From the resulting set-piece, the former Tottenham goalkeeper nervously punched the ball and Targett's deflected effort went just inches wide of the top corner.

The visitors had to wait until the 28th minute to have their first shot, but Odion Ighalo's left-footed effort was deflected wide after a strong challenge from Jose Fonte.

Targett continued to catch the eye with his testing balls into the area and Long could have had a second but for a save from Gomes and a clearance from Jose Holebas.

It should have been 2-0 when Jose Jurado's poor back-pass sold Sebastian Prodl short, but Mane's interception was wasted when he hit the outside of the post.

The hosts could have scored straight after the break when Mane's header was cleared off the line by Prodl, who was back in the first XI at the expense of Craig Cathcart.

Midfielder Steven Davis thought he had doubled Southampton's lead after hitting a sublime volley, but the linesman flagged him offside.

Mane was eventually brought off for Tadic after missing several key chances and the Serbia international scored within two minutes as he slotted the ball past a helpless Gomes.

Watford introduced Victor Ibarbo and Ikechi Anya, but neither could change the momentum of the game as Fraser Forster enjoyed an easy night on his comeback.

The former Celtic star was named in the starting line-up for the first time since March and he did not have a save to make.