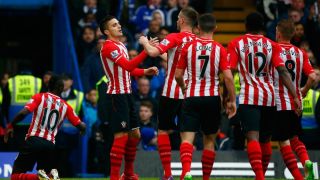 Midfielder Tadic arrived at Southampton in mid-2014, after the club continued its rise through the English football system by finishing eighth in the top flight in 2013-14 with 15 wins.

In 2009-10, the club placed seventh in League One - meaning their achievement last season saw a climb of 43 spots in just four seasons.

While Tadic came through a door which each of Adam Lallana, Rickie Lambert, Luke Shaw and manager Mauricio Pochettino exited in the close-season, Southampton's resurgence was not halted - and they continueto compete for the European spots.

Ronald Koeman's men sit sixth on 53 points, one behind fifth-placed Liverpool - in the UEFA Europa League spot - and six points off Manchester United, who are on track to return to UEFA Champions League action next season.

Tadic, whose three league goals in 2015 have come against Arsenal, United and Chelsea, said Southampton's form this season - which has spawned 16 wins in 30 matches - has not been a shock.

"We believe in our qualities, but maybe some other people and fans were surprised because they didn't know me and some other players and also the coach," the Serbia international told Perform.

"For them it was maybe a surprise but for us it wasn't a big surprise."

He added: "Everyone thought Southampton were going to fall down the table, and we were always there."

Tadic previously plied his trade in the Eredivisie for Groningen and then Twente, and after less than one season in England, the 26-year-old already assessed the Premier League as "more powerful" than its Dutch equivalent.

"Everything has gone well until now, for me and Southampton. I'm really happy with that," Tadic said.

"It's different in Holland where I used to play. It's more powerful football, more about strength. It's nice.

"It's one of the most difficult leagues in the world."

Tadic said that physicality did not disappear when he faced his countrymen in the league, as he did when he was up against Chelsea enforcer Branislav Ivanovic in their 1-1 draw in March.

"We are really good friends and we have played for the national team for a long time," Tadic said of Ivanovic.

"But when we go out on the pitch we say to each other, 'Kill me if you can'.

Southampton are away at Everton on Saturday.