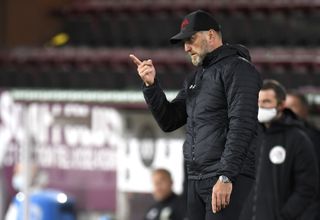 Southampton manager Ralph Hasenhuttl is hopeful of completing a deal for Brest midfielder Ibrahima Diallo ahead of Monday’s transfer deadline.

Diallo, 21, is reported to have agreed a four-year contract, said to be worth £12million.

Saints had been heavily linked with a move for Ibrahim Sangare, who instead joined PSV Eindhoven from Toulouse.

Speaking ahead of Sunday’s Premier League match against West Brom, Hasenhuttl said: “First we must wait until everything is finished. I have seen so many things in this transfer window when finally the deal didn’t happen.

“Let us wait until he is here and then we can speak about how important it is.

“We know we have to bring players in, we lost a few players, we have to do something and hopefully this deal will happen.”

Hasenhuttl appeared less than impressed at not being able to get the Sangare deal over the line, which was reported to be down to problems over a work permit for the Ivory Coast international given Toulouse’s relegation to Ligue 2.

“I think there are some crazy rules out there. The last player we wanted to sign, we did not get a work permit because he was too cheap,” he said.

“If you have not a lot of money and you want to get jewellery that nobody knows, but maybe you could get him, then suddenly he does not get a work permit because he is not expensive enough, it makes it difficult for us to strengthen the team with the money we have.

“This is the big challenge we are facing every transfer window.”

Southampton have been looking to bring in a defensive midfielder following the departure of Pierre-Emile Hojbjerg to Tottenham in August.

Everton’s Tom Davies was another reported option, potentially on loan.

Hasenhuttl accepts it is not always possible for Southampton to get their targets over the line, often trying to complete deals when the player might have plenty of other options on the table.

“We have our limits, the club says to me we have this limit and we can not spend more money than this, and this is the way we have to work,” the Austrian said.

“We have to wait, then when there is nobody else on the page and the player is really convinced about coming to us, then we have a chance to get him.

“But there is most of the time only a small slot where we are able to get these players, then we must be quick, but it is not surprising.

“The interesting thing is we are always on the right players, because then we see they are somewhere else, so we have chosen the right ones, but in the end we do not get them. This is the problem we have.

“Sometimes it is a little bit frustrating, but on the other side, we have alternatives and must still fight for getting players in and hopefully in the end we get some.”

Defender Wesley Hoedt is expected to complete a move back to former club Lazio ahead of the deadline, with the Dutchman having already travelled to Italy.

Saints winger Nathan Redmond is back in contention for Sunday’s match following an ankle problem, but summer signing Mohammed Salisu continues to build his fitness ahead of his debut.