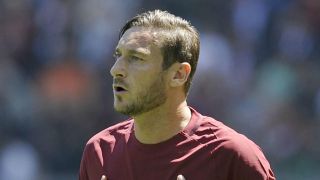 Luciano Spalletti claims Francesco Totti's respect for his team-mates means he is waiting until the end of the season to announce a decision on his future, with the coach adamant Roma's No.10 shirt should not be withdrawn.

Incoming sporting director Monchi this week claimed Totti will retire when the 2016-17 campaign is over and take up a role behind the scenes at Stadio Olimpico.

Spalletti, though, feels it is up to the 40-year-old veteran and the club president to confirm the intentions of the Giallorossi icon.

"If we speak about the Totti situation, he [Monchi] has only reported on the situation he has found," the coach said.

"Francesco is going through the most important moment of his career, he wants to wait the end of the season and he wants to keep quiet in order to stress the importance of the final streak of games.

"Whereas you [the media] care more about his fate than the others, but in order to achieve results, we should take everyone into consideration.

"It's the president who is managing Totti's career ending and it seems to me that he has already done this.

"I haven't heard from any of his entourage and this means that they want to wait the end of the season and only then will he [Totti] voice his thoughts.

"And I think it would be better if it was him doing it. Monchi only stated what he has already found on the table."

Some have suggested the No.10 shirt worn with such distinction by Totti should be retired along with the former Italy international, but Spalletti is fiercely opposed to that symbolic gesture.

He said: "About the shirt, I say that they shouldn't withdraw it. Before Totti, [Giuseppe] Giannini wore the No.10... in the past others withdrew the shirt. But what about the kid who longs to play with that shirt? Do we want to deprive him of this pleasure?

"I can't bear to hear people saying that the shirt should be retired. This is my thought. If I don't see that shirt anymore, then I will go to the cemetery and will look for Totti's shirt to see it again."