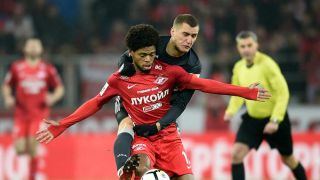 A video uploaded to the club's Twitter page that appeared to show Pedro Rocha, Fernando and Luiz Adriano performing stretching exercises in Dubai was captioned: "See how chocolate melt [sic] in the sun".

Rocha, Fernando and Luiz Adriano are all black.

It is not the first time this season Spartak have found themselves at the centre of racism claims.

The 19-year-old faces a minimum ban of 10 matches if found guilty by European football's governing body.

After the initial game between the sides in Moscow this season, Liverpool made a complaint after Brewster's team-mate Bobby Adekanye was racially abused by fans.