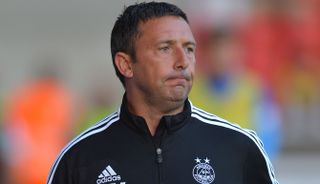 The visitors went into the encounter in fifth place with 17 points, but the victory sees them close in on leaders Celtic, who remain three points clear and have two games in hand.

Derek McInnes' side left it late to secure the win as Scott Vernon finally scored the opening goal in the 80th minute, while Gregg Wylde struck in stoppage time, leaving Hibernian in sixth.

The result of the day came at Tannadice as Dundee United hammered St. Mirren 4-0 to move up to fifth place.

Nadir Ciftci netted twice in the first half to give the hosts a 2-0 lead at the break before Ryan Gauld and Chris Erskine completed the win in the second half.

St. Mirren's only previous Premiership wins this season came in their last two fixtures and they stay in 11th following defeat to Dundee, with only Hearts sat below them after their 15-point deduction at the start of the season.

Saturday's other match saw Kilmarnock pick up their second victory of the season with a 2-0 win over Hearts, who have now not won any of their last seven league matches.

Kris Boyd hit the opener in the 16th minute to send Allan Johnston's men on their way to victory, but they had to wait until the second half before wrapping up the three points.

Boyd grabbed his sixth of the season with 26 minutes remaining and Kilmarnock moved above St. Mirren into 10th.