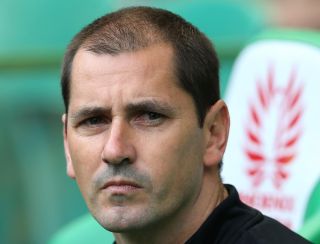 The visitors went ahead in the 25th minute via a Mario Bilate penalty after Thomas Konrad brought down Gary Mackay-Steven in the box and really turned on the style in the second period.

Ryan Dow doubled the lead on 54 minutes, Callum Morris then headed in from close range and Keith Watson nodded in a fourth, with Paul Paton providing a couple of assists.

Dundee had Konrad sent off late on for a second bookable offence, but did at least manage a consolation from Greg Stewart as they suffered a first home defeat of the season.

Celtic had to come from behind to pick up a point in a 1-1 home draw with Motherwell which left them five points off the summit, albeit with a game in hand.

The visitors took a surprise lead when John Sutton struck in the 19th minute and he could have added a second when free in front of goal soon after.

Motherwell were made to pay for that miss when Celtic rallied in the second half through a Kris Commons penalty on 68 minutes after Craig Reid fouled Scott Brown.

Ronny Deila had rung the changes beforehand and had to bring Commons and Brown on for the second period after his side were booed off at half-time, but the manager was not able to celebrate his 39th birthday with a win as the visitors hung on for a point.