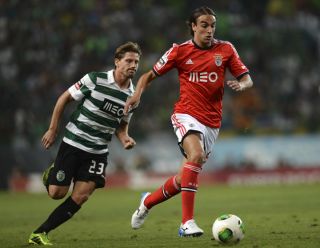 Fredy Montero's fifth goal of the season handed the hosts the early advantage but Serbian Lazar Markovic ensured that the spoils were shared with a second-half strike.

Benfica spurned an opportunity from a promising free-kick in the final third and were punished with a swift Sporting counter-attack that was finished by the head of Montero with 10 minutes gone.

Enzo Perez should have equalised before half-time as he arrived late in the Sporting area and connected with Bruno Cortez's low cross, but he put it over the bar from a few yards out.

Both sides showed attacking intent but a combination of poor finishing and good goalkeeping meant  that the game's second goal did not arrive until 20 minutes into the second half.

The goal was worth the wait, however, as Markovic – a half-time substitute for Eduardo Salvio – picked up the ball before skipping past the challenges of three defenders and poking the ball past Rui Patricio.

In Saturday's only other match, Vitoria Setubal put their poor start to the season behind them as they recorded their first win of the campaign, beating Vitoria Guimaraes 4-1 away from home despite being reduced to 10 men.

Paulo Tavares opened the scoring for the visitors from the penalty spot in the 20th minute, but Marco Matias' third goal in his 31st match for Guimaraes levelled the scores on the stroke of half-time.

Paraguayan defender Javier Cohene restored the lead for Setubal early in the second half, with Ramon Cardozo notching two.

Ruben Vezo was sent off for the visitors in the closing stages.