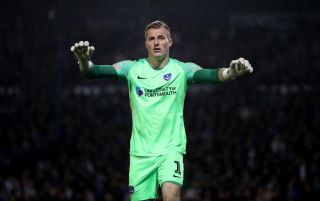 Portsmouth survived a scare to see off Stevenage 3-1 on penalties following a six-goal thriller in the Carabao Cup first round at the Lamex Stadium.

Craig MacGillivray was the hero in the shoot-out, saving three Stevenage spot-kicks after Pompey had fought back from 2-0 and 3-1 down in normal time.

Stevenage, who finished bottom of League Two last season, were two goals to the good inside 10 minutes as Elliott List and Charlie Carter capitalised on defensive mix-ups to find the net.

A Boro handball on the stroke of half-time was punished by Gareth Evans, who converted from the spot, and the visitors were level six minutes after the restart through a fine finish from John Marquis.

Curtis hit the post with nine minutes to play but neither side could find a winner before MacGillivray’s heroics.