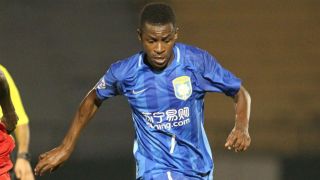 The Chinese Super League might be buzzing after transfer records were sent tumbling ahead of the new season, but a crumbling infrastructure underneath might threaten its long-term prospects.

After CSL champions Guangzhou Evergrande Taobao sold top scorer Elkeson to Shanghai SIPG for a record €18million in the name of "supporting Chinese teams to compete in the AFC Champions League, and for the national glory", the ante was swiftly raised.

Chelsea selling Ramires to Jiangsu Suning (€26m), Jackson Martinez's €42m move to Evergrande and then Alex Teixeira joining Ramires in Nanjing after a €50m move from Shakhtar Donetsk saw the CSL's transfer record demolished four times in under a fortnight as China muscled in on the European market.

The government-backed sporting ambitions do not stop there. As well as building the domestic league, with an eye to developing a stronger national side, China is determined to win hosting rights to the World Cup in the future.

But the disparity between the haves and have-nots of Chinese football, and a struggling junior system, could undermine China's hopes of becoming a true football power.

Lawrie McKinna coached the Chengdu Blades for the better part of a season in 2011 - when the club had an operating budget of just over €3m per season.

The 54-year-old also spent time with Chongqing Lifan, a side then in the second division, but one that will compete in the CSL this term, albeit having not made any big-name signings.

McKinna has doubts about the CSL's strategy of buying big names for top money.

"I was over there a few months ago before Christmas and their grassroots football is a shambles," McKinna told Omnisport.

"I had a meeting with Beijing football and they had 60 clubs registered. The population is 20 million, I think, and on the Central Coast [in Australia, population approx. 330,000] we have 23 [clubs] just here.

"Everyone is just doing their own thing. Okay, you're going to bring in these big foreign players but you need to have the quality coming through as well and that's going to take years."

McKinna suggests that the CSL's wealthy club owners will continue to tip money into their local teams, as opposed to taking controlling stakes in Europe's biggest clubs, to spur growth in cities that align with their business interests.

"The big [property] developers spend money on the football team because it's good for the city," McKinna said.

"If it's good for the city, the government will look at them when they're looking at land leases and they'll look after them. It's all a business."

Former Australia striker Joel Griffiths spent four and a half years in the CSL, winning the title in 2009 with Beijing Guoan, who this off-season signed Turkey striker Burak Yilmaz and Corinthians playmaker Renato Augusto from under the nose of Schalke.

Griffiths believes the money could keep flowing in, barring a full-blown economic catastrophe.

"It depends on the global markets. China went through a boom and they were developing everything, popping up cities and just building these ghost towns and waiting for people to move into them," he said.

"It's slowing down a bit, but I suppose if you're a footballer and you're offered that much it's hard to say no.

"You're probably never going to get it again, so I can understand where they're coming from in ditching these big European clubs."