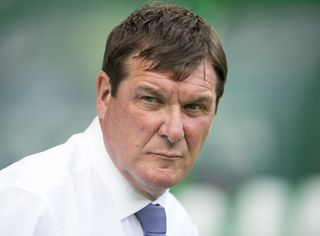 St Johnstone manager Tommy Wright will always have a special place in his heart for the Scottish Cup but he reckons the affection for the tournament is universal.

Wright led Saints to their first major triumph in 2014 when they beat Dundee United in the final.

And while the FA Cup has become a second-string competition for many of England’s big clubs, the Scottish equivalent retains its shine with Celtic determined to maintain their dominance, Rangers desperate to end their long wait for a major trophy and every other club dreaming of winning silverware.

Saints face a fifth-round trip to Ayr, who were the only team to see off Premiership opposition in the previous round when they beat Ross County at Somerset Park.

And Wright expects Mark Kerr’s side to raise their game again as both teams battle for a quarter-final spot.

“It means a lot, particularly to me, to have won the trophy in my first year as manager, the first manager to win it and first team at St Johnstone to win it,” Wright said of the competition.

“That means a lot but that’s in the past and we have to deal with what’s in front of us. It’s a really difficult tie.

“I still love the cup games. I think the Scottish Cup, unlike the English FA Cup, hasn’t lost any of its magic. There is still a huge importance put on it. Very rarely do you see teams play weakened teams and not take the competition as a main focus.

“We have a really difficult tie at Ayr but it’s a great old ground and it will be a great atmosphere.

“I think we have a load of fans going down so it will be a proper cup tie and as a manager and a player you can only look forward to these games.”