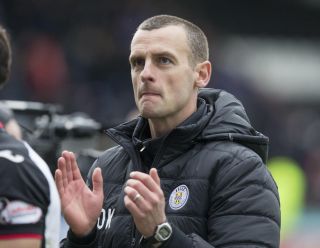 St Mirren manager Oran Kearney believes there is a big argument for the Ladbrokes Premiership play-off final being played over one match.

Saints and Dundee United fans have been waiting in long queues for tickets for this week’s two games and both legs look set to be sell-outs.

And Kearney feels one match at a bigger neutral venue might also better suit players after a long season.

The former Coleraine manager said: “I think there’s a big argument for the one-off game, possibly at a neutral venue.

“In Northern Ireland we do it slightly differently for a European place, third to six play off and whoever finished highest gets home advantage throughout.

“If you look at England, when it comes to the final they have seven to 10 days to prepare for a one-off game.

“I’m sure both sets of supporters have their gripes, our fans not able to get enough tickets for the away game and vice-versa for Dundee United.

“But it is what is and we just have to go and prepare.”