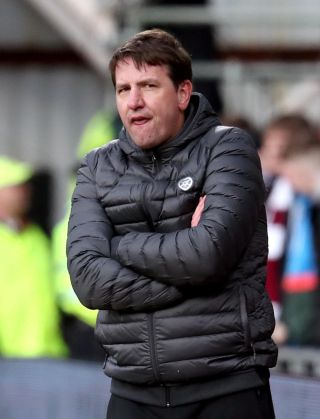 Daniel Stendel believes Hearts are embroiled in a relegation battle the players may not have expected before the start of the Ladbrokes Premiership season.

Following the 3-3 away draw with St Johnstone at the weekend, the Jambos suffered their first defeat in five matches on Wednesday night when they lost 3-2 to Kilmarnock at Tynecastle to send them bottom of the table again, one point behind Hamilton.

Ahead of the William Hill Scottish Cup tie away to Falkirk on Saturday head coach Stendel, who took over from Craig Levein in December, said: “We understand, especially after Wednesday, that it is a big fight.

“The other teams at the bottom know from the start of the season that it is a fight.

“Maybe we didn’t expect it before the season started but this is the situation and we need to take this fight and we want to win this fight.

“We have enough players who understand it.

“Steven Naismith did not expect it but he said, ‘we can do it, we can win this fight’ and everyone has the chance to show they understand how difficult the situation for the club is and also for themselves.

“Everyone wants to play in the Premiership. The ambition for everyone who signs for Hearts is not to play at the bottom but this is the situation and we need to take responsibility to sort the situation.”

Defender Michael Smith is set to return to the side after recovering from a knock to add a more defensive aspect to a team which has conceded six goals in their last two games.

“We are enjoying playing front-foot football but we just need to tweak it and that will see us winning games again.

“We have had a few meetings with the gaffer about ways of sorting that out so I’m sure you will see a little bit different on Saturday, we will be a little more secure at the back.”

Smith was in the Hearts team which lost 2-1 to Celtic in last season’s final and insists there is no reason why the Gorgie side cannot go all the way again.

The former Bristol Rovers and Peterborough United player said: “I thought we were quite unlucky to lose.

“It still hurts me but hopefully we can make another final this year.

“People probably would have put it past us last year, not making the final.

“Things have to go your way, the draw has to be kind to you and you need a bit of luck on the way so fingers crossed.”