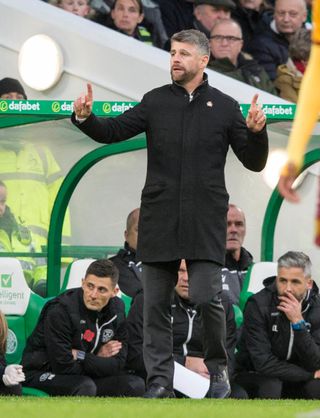 Motherwell manager Stephen Robinson hailed his team’s “incredible achievement” after their third-placed finish in the Ladbrokes Premiership was confirmed.

Well were one point clear of Aberdeen when play was suspended hours before they were due to host the Dons on March 13.

Robinson’s side now qualify for the Europa League along with Rangers and Aberdeen after the Scottish Professional Football League board confirmed the campaign had ended.

“It is an incredible achievement to finish third in the Premiership,” Robinson told his club’s official website. “Regardless of how it came to an end, this squad have earned their place with their performances across the season.

“Our target every year is to stay in the division, although we always have aspirations to surpass that.

“But to come third given the parameters we work under, and the quality of the teams we have finished above, speaks volumes for the hard working, talented group of players and staff we have.”

Chairman Jim McMahon added: “The season may not have ended with a last-game finale, but our sense of achievement remains.

Can’t take much credit in it but what an achievement for @MotherwellFC to finish 3rd 👏🏻👏🏻 from the moment I walked through doors in February can understand why they are where they are 🔥🔥🔥🔥— Tony Watt (@32watto_) May 18, 2020

“During difficult times, we can reflect on the good moments the team brought us across the season in reaching third spot. Football is not the priority in these difficult times. But it gives us a common purpose from which we can draw some comfort.

“We can also look forward to playing European football again, whenever that may be.

“But most crucially, our club – and Scottish football as a whole – can now be focused fully on trying to get playing again at the earliest, safest opportunity.”

St Johnstone managed the extraordinary feat of sealing a top-six finish despite not being in the top half of the table at any point during the season.

Obviously not how anyone wanted to finish the season but happy to have finish 6th considering the poor start we had👏🏼 onto next season now💙⚽️— Jason Kerr (@JasonKerr08) May 18, 2020

Saints were bottom of the league in December but a major upturn in form put them a point behind Hibernian. And, with a game in hand against Rangers, they leapfrogged Hibs on points average.

Skipper Jason Kerr said on Twitter: “Obviously not how anyone wanted to finish the season but happy to have finish sixth considering the poor start we had.”

Hibs welcomed the decision to end the season despite dropping a place.

“At this time of coronavirus-driven crisis, it brings some certainty and clarity to an otherwise extraordinary situation,” a club statement read.

While Hearts threatened legal action if they cannot avoid the drop by securing agreement on reconstruction, other clubs celebrated survival.

Hamilton were briefly bottom in early March but beat Rangers and Kilmarnock in their final two matches to extend an unbeaten run to four games.

As per the SPFL’s decision today we are confirmed in 11th place in the Premiership for 2019-20. Our last 2 games played in early March saw us beat Rangers & Kilmarnock. Thanks to our fans for all your support. 2020-21 will be a 7th successive top flight campaign for us 👍🔴⚪️🔴 pic.twitter.com/V89w6XDrrq— Hamilton Accies FC (@acciesfc) May 18, 2020

Full-back Aaron McGowan wrote on Twitter: “Nobody wanted to finish like this… Most Important thing is we got the job done.”

Striker George Oakley added: “Not the way we planned for this season to be over and cut short but absolutely delighted @acciesfc to be staying up another enjoyable year fully deserved! Miss the game but it will be back.”

Tenth-placed Ross County’s chairman, Roy MacGregor, said on his club’s website: “It’s safe to say that it is not the way I think anybody wanted the season to end but it was the only natural conclusion that could be drawn, in our eyes, where we could get some clarity.”