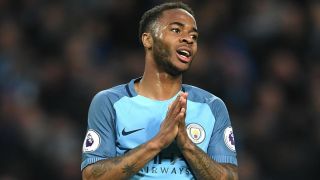 Raheem Sterling insists he deliberately avoided making contact with David Silva's opening goal for Manchester City against Leicester City so as not to be flagged offside.

Pep Guardiola's side took the lead in controversial fashion in Saturday's clash at Etihad Stadium, with Silva's scuffed shot bouncing into the corner as Sterling swung a foot at the ball from an offside position.

Referee Bobby Madley allowed the goal to stand, a decision that helped City on their way to a hard-fought 2-1 win that gives their hopes of finishing in the Premier League's top four a significant boost.

And Sterling says he intentionally missed the ball to ensure that the goal would not be disallowed.

"As an attacker you always try to be in and about the area, but I realised that if I touched the ball I'd be offside," he told Sky Sports.

"I tried to intentionally swing a foot at it but I realised if I did hit it I'd be offside, so I left it.

"I wasn't worried [about it being disallowed] because I knew I didn't touch it. It's definitely David's goal.

"It's a massive win. We got the luck we needed, at times we haven't got that this season."

Gabriel Jesus doubled City's lead with a penalty before Shinji Okazaki got a goal back for Leicester, who thought they had equalised in the second half when Riyad Mahrez converted his own spot-kick.

The goal was disallowed, however, after Madley correctly spotted that Mahrez had kicked the ball onto his standing foot as he struck the penalty, meaning a free-kick was awarded in City's favour.

Yaya Toure admitted that it was a stroke of luck but felt a 2-2 draw would have been unfair on the home side.

"Yes, I realised of course," Toure said of the Mahrez incident. "I was right behind him and I could see. Sometimes you're unlucky in football. 2-2 would have been harsh, I think.

"It was difficult. The first half was quite good, we controlled the game after the first goal and did well. When they scored it was quite difficult. We created a lot of chances that we weren't able to convert. We're delighted with the win."