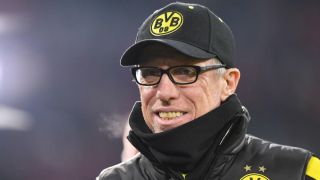 Peter Stoger plans to stay at Borussia Dortmund beyond the end of this season "if everything fits".

Dortmund turned to Stoger following the dismissal of Peter Bosz in December, but only handed him a contract until June 2018.

The 51-year-old suggested he could remain at Signal Iduna Park beyond his existing deal, though he is confident he will have interesting alternatives should things not work out.

"I'll try to take my chance and then we'll see what happens," said Stoger in an interview with Sport Bild.

"If I am successful – but do not remain – I would probably have good opportunities afterwards. If everything fits, I'll stay.

"I'm in a really happy phase here. Instead of doing nothing, I can coach Borussia Dortmund for six months."

One of Stoger's biggest challenges at Dortmund is dealing with star striker Pierre-Emerick Aubameyang, who was left out of the squad for Sunday's 0-0 draw with Wolfsburg for "disciplinary reasons".

Gabon international Aubameyang has been linked with a move to the Chinese Super League and Arsenal, and the BVB coach is struggling to understand his recent actions.

However, he does not feel it will damage his chances of getting the Dortmund job on a long-term basis.

"Disappointment is the wrong expression. It's more like incomprehension, because I cannot really understand his behaviour. But I'm not the only one," said Stoger.

"I want every player to find support in the team. That's my top priority. I don't think about whether someone could spoil my future."