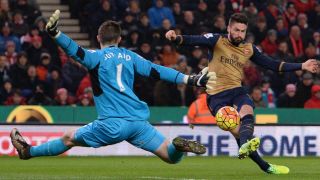 Arsenal returned to the top of the Premier League after a tight 0-0 draw at bogey club Stoke City, with Jack Butland again in sparkling form.

The 22-year-old goalkeeper made terrific saves to deny Alex Oxlade-Chamberlain and Olivier Giroud twice, while Arsenal's Petr Cech made a superb double stop to keep the scores level.

Arsenal had not won at Stoke since February 2010 and never looked likely to find a way through Butland, who continues to pile pressure on Joe Hart's England place.

Stoke, having already beaten Manchester United, Chelsea and Manchester City at home this season, had the better of the game without creating clear chances and Mark Hughes' men could not break the deadlock.

The draw sees Arsenal climb above Leicester City and back to the top of the Premier League on goal difference, while Stoke remain handily placed in seventh spot.

Arsenal were without playmaker Mesut Ozil due to a foot injury, with Alexis Sanchez not ready to return and new signing Mohamed Elneny named on the bench, while Xherdan Shaqiri's hamstring injury kept him out for Stoke.

Openings were rare as the game began in cagey fashion, Marko Arnautovic and Ibrahim Afellay both failing to hit the target with efforts from long range as the hosts started the better of the two sides.

Stoke switched off from an Arsenal corner in the first minute of the second half, Giroud running clear of his marker to divert a header towards Butland's bottom-left corner, but the goalkeeper was again alert to tip the effort around the post.

Arsenal then had two penalty claims with Philipp Wollscheid involved in both, first appearing to haul down Giroud before Theo Walcott went down under the defender's close attention.

The visitors knew a point would be enough to send them back to the top of the Premier League and Petr Cech pulled off a brilliant double save to keep the game scoreless on 55 minutes. He plunged to his right to deny Joselu, before scrambling to keep out Bojan Krkic's shot.

Cech turned another effort from Joselu around the post as Stoke cranked up the pressure in search of a third straight home Premier League victory.

Aaron Ramsey then cleared a goalbound header off the line in the final minute of normal time, with Cech thrusting out a leg to deny Joselu from the rebound.

Ultimately neither side could force a breakthrough, meaning Hughes continues to enjoy an impressive individual run at the expense of Wenger, with the Welshman's teams now unbeaten in eight home league games against Arsenal.

-Mark Hughes is unbeaten on home soil as an opposition manager against Arsene Wenger in his last eight Premier League matches (W5 D3), spread across five different clubs.
-Stoke City have lost just one of their eight Barclays Premier League games at the Britannia Stadium against Arsenal (W4 D3 L1).
-It is the first time since November 2012 at Aston Villa that Arsenal have drawn 0-0 away from home in the Premier League.
-The Gunners have won just one of their last six Premier League away games (D3 L2).
-Arsenal have kept three successive league clean sheets against the Potters for the first time since December 1972.
-Only against Chelsea (two in September 2015) have Arsenal registered fewer shots on target in a Premier League match this term than they did versus Stoke on Sunday (three).
-Petr Cech, who kept his 10th clean sheet this season (a joint-high with Joe Hart), has kept 10 clean sheets against Stoke in his Premier League career; only against Newcastle (12) has he kept more.
-Jack Butland made three saves versus Arsenal, taking his season tally to 81 – the most in the Premier League in 2015/16.