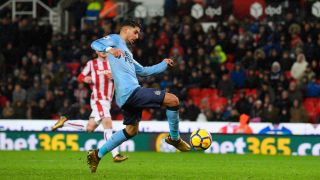 The Potters boss played a weakened XI at Chelsea, where his side were thrashed 5-0, in an attempt to keep key players fit for this crunch clash.

However, Xherdan Shaqiri was ineffective during his 57 minutes on the pitch, Peter Crouch was isolated in attack and Kurt Zouma lost Perez for Newcastle's winning goal.

A limp performance will do the under-pressure Hughes no favours as he tries to cling onto his job, with Stoke conceding for the 47th time this season - the Premier League's worst defensive record.

It was a huge victory for Newcastle, preserved by a pair of stunning late Karl Darlow saves, and Ciaran Clark will have been relieved to see Perez convert in the 73rd minute, having blazed over the crossbar from inside the six-yard box in the first half.

Three points lift the Magpies to 13th, four points above the drop zone, and will boost confidence ahead of a January that could be tumultuous at St James' Park amid reports of a takeover.

FULL TIME Stoke City 0-1 Newcastle UnitedThat's it - it's back-to-back away wins in the for the Magpies!!!January 1, 2018

Hughes appears to be in most need of January recruits, though, and his team selection at Stamford Bridge had laid bare the importance of this contest, but his side failed to grasp the nettle and Newcastle dominated the first half.

Darlow made a meal of Charlie Adam's 35-yard free-kick, but Newcastle should have gone ahead on the half-hour through Clark.

Perez flicked Matt Ritchie's fierce corner into the path of Clark, no more than three yards out, but the Republic of Ireland defender shanked well clear of the crossbar.

Clark soon redeemed himself with an excellent defensive header to deny Crouch a tap-in, but Newcastle remained on top, making regular in-roads down the Stoke left, where Eric-Maxim Choupo-Moting offered Erik Pieters little support against Yedlin and Jacob Murphy.

Choupo-Moting provided a reminder of his primary function early in the second half, darting infield and bringing a fine stop out of Darlow from 20 yards.

Hughes was quick to hook Shaqiri and introduce Mame Biram Diouf barely two minutes after the Swiss had refused to chase a long ball, much to the home fans' ire.

Newcastle pressed on and Jonjo Shelvey fizzed a free-kick just wide, before substitute Dwight Gayle went to ground under a clumsy Zouma challenge, but referee Chris Kavanagh was unmoved.

15 - Stoke have now conceded the first goal of the game on 15 occasions in the Premier League this season; more often than any other team. Routine.January 1, 2018

Yet more space down the Stoke left was exploited by Murphy, who had time to run and pick out a fine cross that left the unmarked Perez with the simple task of prodding past Butland from 10 yards.

The desperate state of affairs for Stoke finally brought them to life, but Darlow denied Diouf in spectacular fashion twice inside seven minutes, first throwing out a left hand to block the Senegal international's hooked effort and then denying the same player's six-yard header to make sure of a precious win.