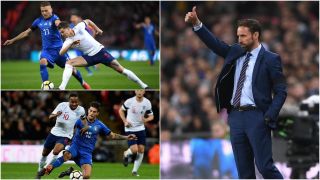 Jamie Vardy put England within three minutes of victory over Italy at Wembley before VAR and Lorenzo Insigne struck.

The Napoli forward's penalty earned Italy a 1-1 draw and some encouragement for the substantial rebuilding job ahead.

For England there were more positives on the countdown to the World Cup in Russia following Friday's 1-0 win over Netherlands.

Here, we look at some of the major talking points from Wembley.

The are denied late on, as the level it up after a VAR-awarded penalty kick.Unlucky, lads! March 27, 2018

John Stones told reporters this week he has found his spell out of the Manchester City first XI to be "difficult". It cannot have been any more trying than the opening quarter of an hour he inflicted upon himself, his team-mates and the Wembley public. Inside the first minute, Stones errantly looked to step out from his position at the heart of Gareth Southgate's three-man defence but managed to recover in time to dispossess a hesitant Ciro Immobile.

The former Everton centre-back then dithered on the ball to present Immobile with another chance, before the Lazio striker found a yawning gap between Stones and club-mate Kyle Walker to head wastefully over. Southgate has shown he will not pick solely on reputation but, for the calm passing style the manager has instilled in this young England squad, an on-form Stones for Russia 2018 would be a huge boost. On this evidence, how much action the 23-year-old should expect to see in crunch club games between now and the end of the season is debatable.

England's performance improved significantly following Stones' early trial – thanks in no small part to his City team-mate Raheem Sterling. The livewire attacker tore repeatedly at Italy's backline with palpable menace, while defenders grasped for means fair or foul to halt his attacks. Sterling won the free-kick that, combined with Jesse Lingard's quick thinking, allowed Vardy to emphatically break the deadlock.

The 23-year-old's international goal drought now stands at 19 matches, but that anomaly, for a player who has scored freely at club level this season, should not persist with him in this mood. Sterling's tribulations in England colours have been well documented, yet there was a telling response from the stands – one of encouragement, not derision – when he lifted a 67th-minute shot over. It was the welcome sound of bridges being built.

Sterling was part of a sharp and bright attacking line operating behind Vardy, who found company for himself in the nuisance stakes from Lingard and Alex-Oxlade Chamberlain. In the period between the Leicester City favourite's goal and half-time, England looked a horrible proposition for any defence, always on the move. It was vindication for Southgate's bold decision to leave Dele Alli on the bench and select the players best suited to carrying out his tactical vision, in accordance with their current form.

A repeated folly of England at major tournaments over recent years has been an absurd desire of the man in charge to shoehorn every star name into an XI at the expense of tactical cohesion. Southgate seems determined to make a clean break from this nonsense and it is to his immense credit.

Another regular gripe for this generation of Three Lions fans has been players who shine for their clubs and perform as imposters when the national team comes calling. Unfortunately for Italy, Immobile showed this is not a uniquely English disease. A stunning return of 24 goals in 26 Serie A games for Lazio this season meant there was no better person to be close at hand during Stones' early generosity.

However, Immobile simply joined the England man in undergoing a Wembley ordeal – hesitant, lacking sharpness and off-target. The 28-year-old also drew blanks during Italy's play-off humiliation against Sweden and looked on from the bench as the Azzurri rallied. Andrea Belotti leading the line, fellow substitute Federico Chiesa winning the penalty and Lorenzo Insigne converting looked a lot more like the future.

Whisper it quietly and fetch me a tin hat as you do so, but the video assistant referee system actually worked pretty well for the penalty that led to Italy's equaliser. It was hard not to feel for James Tarkowski, who enjoyed an accomplished international debut until that point, but the Burnley centre-back grabbed at Chiesa and trod on his foot. Whether the Fiorentina winger was already on his way down is a moot point, but referee Deniz Aytekin was afforded a clearer view on the monitor than he had on the field and the reasons for his prompt decision were clear, whether you agreed with them or not. No VAR "shame", "farce" or suchlike here.