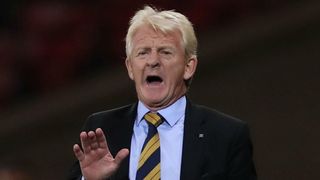 Gordon Strachan compared Scotland's World Cup qualifying campaign with the experience of trying to reach Euro 2016 after they beat Malta 2-0, saying: "We've made it a roller coaster ride".

One win from their opening four World Cup qualifiers left Scotland's hopes of going to Russia in tatters, but victory over Malta marked their third win in their last four Group F games and left them just one point behind second-place Slovakia in the table.

After the game, which Scotland won courtesy of goals from Christophe Berra and Leigh Griffiths, Strachan recalled missing out on the European Championship play-off by three points as he hoped to go one better this time around.

Scotland face Slovakia and Slovenia in October, and two wins could be enough to secure them one of eight two-legged play-off places.

"It's like the last group we were involved in, with Germany, [Republic of] Ireland and Poland, that was a fantastically hard group," Strachan told Sky Sports. "All of them went on to do well at the finals of that tournament, and we knew from the start how hard it was going to be.

"Again, we've made it a roller coaster ride but I've got to thank the players and the fans for turning out tonight and performing."

Scotland's performance against Malta was subdued in comparison to their fluent display when beating Lithuania 3-0 on Friday, and Strachan admitted that fresh legs were needed.

"I'm really happy," he said. "It was a must-win game really. In Lithuania I thought our performance was terrific, and maybe I should have freshened it up a bit – that's something we have to learn from.

"We made a lot of chances - 25 attempts – that's not bad, plus the 23 in Lithuania and you're up to nearly 50 attempts at goal. That's not bad going and no goals against.

"We'd like to finish better, that might come in the next game. We can be really pleased with our work, everybody in the squad. There are people disappointed that they haven't played but I think they understand it."

Asked if he had belief in his players ahead of the double-header against Slovakia and Slovenia, Strachan replied: "Yes, as long as everybody keeps fit and healthy, and good players play well. Hopefully when we meet up again we'll have a choice of 23 guys on top form."