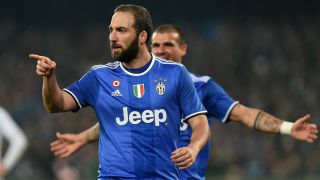 Stefano Sturaro says Juventus team-mate Gonzalo Higuain showed against Napoli that it takes more than jeers from the fans to stop him.

The Argentina international scored twice at the San Paolo on Wednesday to help his side to a 5-4 aggregate victory in a thrilling Coppa Italia semi-final showdown.

Higuain, who left for Juve in a €90million deal last July, was booed throughout by the home support and was confronted on the pitch by one fan brandishing a Napoli scarf.

And Sturaro was left hugely impressed by the way Higuain was able to rise above the attention to take his tally to 25 goals in all competitions for the season.

"Gonzalo is a world-class player and he doesn't need us to tell him that," said Sturaro said, as quoted by Juve's official website. "He has a brilliant squad supporting him. It will always take more than whistles and boos to stop him."

Juve's progress to the final keeps their hopes of a treble alive, with Massimiliano Allegri's side six points clear at the top of Serie A and gearing up for a tantalising Champions League quarter-final tie with Barcelona.

Sturaro believes the players are responding perfectly to what he considers to be an anti-Juve agenda in the media.

"Newspapers, social networks, television - we see it all as players," he said. "It seems as though everyone wants Juventus to lose, but we get our own back every year by winning trophies.

"This year we are in the hunt for another three once more."