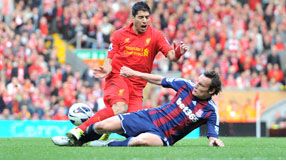 The Liverpool striker, set to play in Friday's World Cup qualifier against Argentina in Mendoza, was banned for last month's 4-0 defeat by Colombia and then booked for dissent on his return in the 1-1 draw with Ecuador.

Suarez is one of seven Uruguayans carrying a yellow card who will miss Tuesday's match in Bolivia if they are booked against Argentina.

"As the years go by you realise what you have to correct," Suarez told the Uruguayan daily El Pais on Thursday. "I'm 25 and there are things I must improve like my attitude on the pitch.

"But that's how I've played since I was a kid. I try to correct it but there are times when my anxiety makes me play that way. Everyone knows I gesture a lot, talk and protest and those are things I must improve on."

In England, where Suarez was suspended for eight matches last season for racially insulting Manchester United's French defender Patrice Evra, there have been demands this week for the striker to be punished for alleged diving.

Stoke City manager Tony Pulis complained on Sunday that, during his team's 0-0 draw with Liverpool, the Uruguayan had dived attempting to win a penalty.

Suarez said earlier in the week he felt reassured by the backing of Liverpool manager Brendan Rodgers.

"That the manager supports me and is with me is important," he explained.