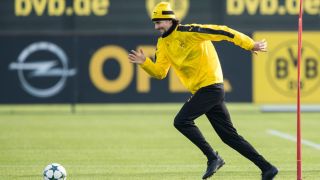 Neven Subotic has returned to Borussia Dortmund team training for the first time since undergoing surgery in July.

The 27-year-old missed the end of last season due to a rib injury and saw a potential transfer to Middlesbrough fall through after it was confirmed he would need an operation to correct the problem.

Dortmund welcomed the Serbia international back for a full session on Wednesday, as head coach Thomas Tuchel oversaw a session involving those players who have not been called up for international duty.

Subotic could now be available for the matchday squad for the clash with Bundesliga champions Bayern Munich on November 19.

His return comes as a timely boost for Tuchel, who saw his side beset by injury problems prior to the international break.