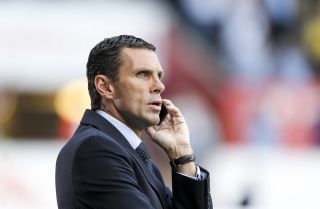 The 45-year-old replaces Paolo Di Canio, who was sacked last month after 13 games in charge.

Former Brighton manager Poyet's initial task will be to keep Sunderland in the Premier League. After securing only one point from their first seven games, the Black Cats are rock-bottom of the division, six points adrift of safety.

It will be the first taste of top-flight management for the former Chelsea and Tottenham Hotspur midfielder, who will be aided by his staff Mauricio Taricco and Charlie Oatway. Poyet's only senior management experience so far has been at Brighton and Hove Albion, whom he led to the League One title and the Championship play-offs before departing in controversial circumstances over the summer.

Replacing Di Canio as head coach, Poyet will be working under the director of football Roberto De Fanti. Sunderland owner Ellis Short is believed to have interviewed Poyet a fortnight ago immediately after Di Canio's exit; in the meantime, caretaker manager Kevin Ball has guided the team to two much-improved but still ultimately fruitless home defeats, to Liverpool and Manchester United.

Announcing the appointment, Short said: "We analysed a wide range of candidates and believe that Gus's track record, experience, commitment and passion make him the right man to take us forward. We welcome him to Sunderland."

Poyet will take charge immediately, working with those Sunderland players not away on international duty. His first game in the dugout will be next Saturday at Swansea City, with his first home game the following Sunday against fierce local rivals Newcastle United.