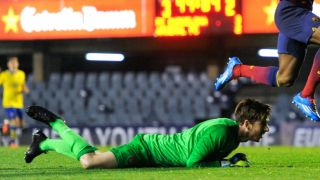 Goalkeeper Josh Vickers has signed a two-year deal at Swansea City following a successful trial period with the Welsh club.

The 19-year-old spent the close-season on trial with Swansea after being released by Arsenal in June and impressed in first-team friendlies.

A strong showing against 1860 Munich caught the eye and Vickers has moved to the Premier League club just a day after fellow keeper Gerhard Tremmel returned.

Tremmel is back at the Liberty Stadium less than three months after being released, with the pair offering Garry Monk back-up for first-choice pair Lukasz Fabianski and Kristoffer Nordfeldt.

"I have been here five or six weeks now, taking part in some great matches and feel I have settled in well," Vickers told Swansea's official website.

"This club is going in the right direction. How the first team performed last year is breathing confidence though the whole team, it is a club on the up and it's great to be a part of.

"My aim here is to push on. I hope to be training with the first team most days and to feature for the Under-21s doing the best I can, and I think there is a chance for me to grow and develop here."