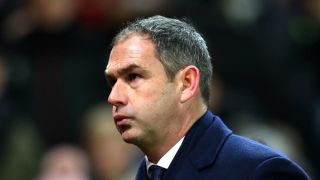 Paul Clement accepts Swansea City deserve to be bottom of the Premier League after his side lost 2-1 at Stoke City.

Wilfried Bony's volley against his old side gave the visitors an early lead, but Xherdan Shaqiri and Mame Biram Diouf struck in the space of four minutes to condemn Swansea to a sixth loss in their last seven league games.

"I believe we have slipped to the bottom of the table and I can't say we're unlucky," Clement said. "I can't say, although it's the case, that we have lost eight games by only one goal. We have lost 10 games and it's not been through misfortune.

"We deserve to be bottom because we are losing too many games. We are not consistent enough through a 90-minute period. The team are working in a very focused, professional manner from Monday to Friday but the most important thing is 15:00 on a Saturday afternoon.

"We started very well here with the goal and played some nice football after that. Then there was a mistake when Leroy [Fer] was dispossessed in a dangerous area and they capitalised.

"On the second goal we are too deep. [Peter] Crouch is so good in the air - although our centre-half [Mike van der Hoorn] slipped - but our positioning for the second ball wasn't right."

6 - Wilfried Bony has scored six goals in his five apps in Premier League games between Stoke and Swansea - scoring twice for Stoke and four goals for Swansea. Cool.December 2, 2017

Bony's goal broke a run of four matches without finding the net for Swansea, but Clement believes his side still need improvement in the final third.

"We are a toothless team," added Clement. "For a team in the Premier League, our possession stats are probably in the middle - we are 10th or 11th in that list I think.

"Defensively we are okay, even though there were a couple of poor goals today. Our defensive record is good enough to be a mid-table side. But offensively we are nowhere near good enough. We don't create enough and we don't score enough. That's our big issue."

says today's win against is exactly what the Potters needed and hopes it will help kick-start their campaign.December 2, 2017

While another loss left Clement despairing at his side's performance, Mark Hughes felt the margin of victory should have been greater after Diouf's winner saw Stoke record their first Premier League win since October.

"It was a different type of performance to be perfectly honest," Hughes said. "We knew the importance of the game and we just had to go out there and get the job done, which thankfully we managed to do.

"We would have liked to have got on the ball and passed it around a little bit more than we did do, but in fairness to Swansea the way they set up restricted us from doing that to a degree.

"We wanted to get two guys up front to put them under more pressure and as a consequence of doing that, the pressure told in the end and we deservedly scored the two goals that swung the game back into our favour."