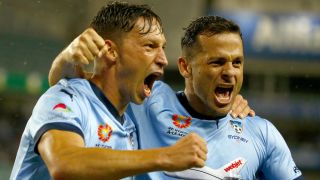 Sydney FC are closing in on becoming A-League premiers after defeating Melbourne Victory 1-0 in a top-of-the-table clash on Friday.

The league leaders made it back-to-back wins over the sides from Melbourne after a second-half goal from Bobo secured all three points.

The win, which follows last week's 3-1 triumph at Melbourne City, ensured the hosts moved 11 points clear at the top with only five matches of the regular season left to play.

Bobo and Filip Holosko both came close to breaking the deadlock in a tense first half at Allianz Stadium, as the heavy rain made the surface treacherous.

Sydney's pressure eventually paid off early in the second half, Holosko capitalising on a poor clearance before crossing the ball to Brazilian forward Bobo, who finished neatly in the bottom corner for his 11th goal of the campaign.

Alex Brosque had a brilliant chance to make it 2-0 following a fine run and cut-back from Rhyan Grant, but the captain saw his first-time shot parried round the post by Lawrence Thomas.

Thomas made another late stop to deny Matt Simon, but Besart Berisha blazed Melbourne's best chance over the crossbar, leaving the Premiers Plate almost beyond their reach.