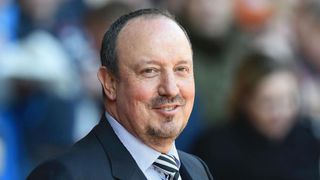 Rafael Benitez put Newcastle United's superb second-half revival in the 2-2 draw at Liverpool down to two or three minor tactical adjustments at half-time.

It appeared as though it would be an unhappy Anfield return for Benitez as Newcastle were outplayed in the first half, Daniel Sturridge's second-minute goal and Adam Lallana's fine curling strike helping Liverpool to a 2-0 lead.

But Newcastle continued the fight they have shown in recent matches in a continued battle against Premier League relegation as goals from Papiss Cisse and Jack Colback after the break earned a potentially crucial point.

"We changed two or three little things but we were still working hard and believed we could do it. A draw is fine for us at the moment.

"When you are bottom of the table and can still see this spirit and fight you have to be pleased. It's a bigger step for us because we can keep believing, every game now for us is massive."

Benitez spent six years as manager of Liverpool and led the club to a memorable Champions League triumph in 2005, before following up a year later with a famous FA Cup victory.

All four sides of the stadium chanted Benitez's name at the final whistle, and the Spaniard enjoyed an emotional Anfield return.

"Yeah, for sure, my relationship with the Liverpool fans, club and city, is really good," he added. "I have the Geordies and the Scousers on my side now. I'm really pleased for that too.

"It was very emotional at the beginning. Hopefully Liverpool can win the Europa League. Jurgen [Klopp] is doing a great job."