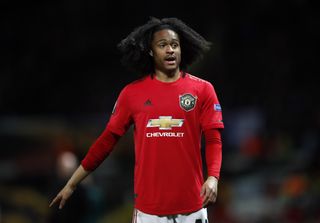 The Holland Under-21 international only signed a new contract at Old Trafford in March, which keeps him contracted to United until June 2022, with the option to extend the deal by a further year.

Chong first moved to England four years ago from Feyenoord and has progressed to the fringes of the first team, but will spend the upcoming campaign in Germany.

🎥 A few words from our new loan signing @TahithC who joins us from @ManUtd for the 2020/21 season!#werderpic.twitter.com/cqbXKBPj7w— SV Werder Bremen EN (@werderbremen_en) August 16, 2020

Bremen revealed on Sunday morning the winger had been given permission to train while the final details of his switch were finalised and he joined the squad out in Austria before United confirmed the deal later in the day.

Chong told the official club website: “First of all, I’m happy to be here and I’m looking forward to pre-season training with the team.

“This move is a great opportunity for me to develop. I’m looking forward to next season.”

Bremen are out in Zillerdeich for a pre-season training camp ahead of the new Bundesliga campaign, which is due to begin on September 18.

Florian Kohfeldt’s side finished 16th last season and stayed up after a relegation play-off with Heidenheim, surviving only thanks to the away goal rule.

He added: “He’s a very technically gifted player who can play on both wings. He’s also really fast, which will help our game.

“Defensively he has potential for development – he’s still only at the start of his career and we want to help him continue fulfilling his potential.”